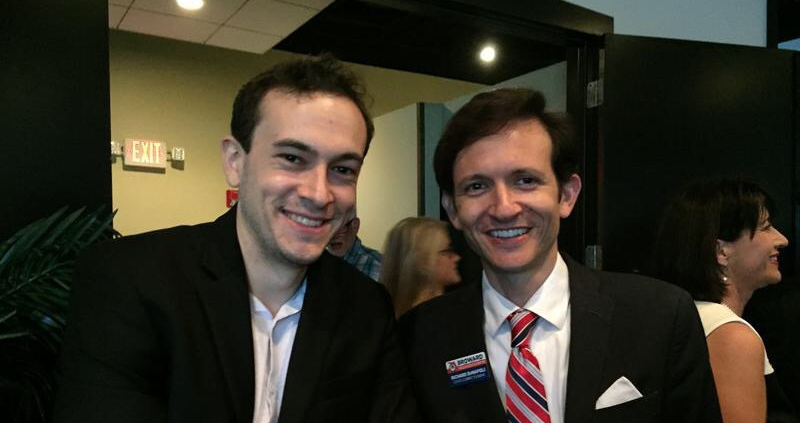 The Broward Republican Party, mired in a take-no-prisoners civil war, is now being rocked further as members learn about the violent criminal background of one of their officers.

As long-simmering tensions between party factions boiled over in recent weeks, Republicans discovered that the party secretary they elected four months ago, Rupert Tarsey, beat a young woman with a claw hammer in a 2007 incident in California.

Tarsey was a student at an exclusive private high school in California 10 years ago when he bludgeoned a female student, who was severely injured.

Ultimately, the criminal case ended with a sentence of probation. Tarsey changed his name and moved to Florida about five years ago, and got involved in Donald Trump’s presidential campaign and local Republican politics.

Tarsey is the most dramatic, but not the only, problem facing the Broward Republican Party.

In the past month, the executive board voted no confidence in party Chairman Bob Sutton, a move that doesn’t affect his status as party leader. The chairman suspended Tarsey, even though the rules don’t give him the authority to do so. A congressional candidate is pushing to have the entire membership remove Sutton from office. And another party activist’s long-ago criminal past is receiving renewed attention.

The county party also is desperate for cash. Reports filed with the Supervisor of Elections Office show the party raised $7,378 in the first six months of 2017, with more than two-thirds of that the value of donated office space. The annual Lincoln Day fundraising dinner wasn’t held this year. In the previous four non-election years, Broward Republicans average $105,800 in income. The lack of money could hinder the party as it attempts to organize for the 2018 elections.

One of the few things various factions of Republicans agree on is just how bad things are.

“It’s a joke,” said Bob Wolfe, founder of the Lauderdale Beach Republican Club and co-chairman of Mitt Romney’s 2012 presidential campaign in Broward. “It is sort of embarrassing.”

The party’s vice chairwoman, Celeste Ellich, was even more blunt: “We’re in hell in the Republican Party.”

Earlier this month, Republican insiders began hearing whispers about Tarsey’s past. Tarsey himself offered an explanation and defense emailed to many in the party.

In several 2007 articles, the Los Angeles Times detailed the attack and the criminal case:

Rupert Tumin Ditsworth of Beverly Hills — who is now Rupert Tarsey of Parkland — was charged in a felony complaint with attempted murder and assault with a deadly weapon for allegedly beating an 18-year-old woman with a claw hammer.

Ditsworth was 17. Police said the victim, a fellow student at Harvard-Westlake School, one of the nation’s most prestigious college-preparatory schools, was left with a broken leg and a broken nose. Her mother said the victim was struck 40 times and her scalp was split.

Police said the teens had gone for a drive in Ditsworth’s 2000 Jaguar after school. The victim’s mother said she was invited to get smoothies after finishing an Advanced Placement exam. Ditsworth began talking about suicide and began striking her with the hammer, her mother told the Los Angeles Times.

The victim’s mother, a physician, described what she saw when she arrived at her daughter’s bedside. “Her hair and face were caked with blood,” she said. “On the left side, her head was shaped like a football.”

The student newspaper at Harvard-Westlake reported that after she was released from the hospital, the victim attended the prom in her wheelchair and graduation on crutches.

In a telephone interview and subsequent email to the Sun Sentinel, and in an email to Broward Republicans, Tarsey, now 28, provided a different version of events and the woman’s injuries.

“The individual went on to go to the school dance several days after this incident, and I believe was in class after the weekend,” he wrote.

In his email to the Sun Sentinel he said it was self defense, explaining “my classmate was taller and 30 lbs heavier than my slight 5’10”, 125 lb frame, (as documented in the police report,) when I was pinned to the car door by my classmate’s foot against my chest unable to breathe.”

Tarsey also wrote, using capital letters, that “EVEN THOUGH I WAS ACTING IN SELF DEFENSE I STILL REGRET WHAT HAPPENED AND FEEL THAT MY ACTIONS WERE UNCALLED FOR.”

As the case made it through the courts, Tarsey said it was dismissed twice in juvenile court. He ultimately pleaded no contest to one charge as an adult because “I didn’t have the time to continually fight the case over many more years.”

The charge was aggravated battery with a deadly weapon. “The fact that any and all other serious charges against me were dropped after the court reviewed the evidence speaks for itself,” he wrote.

He said he served probation but wasn’t sure for how long, and served no jail or prison time. Tarsey said the charge was initially a felony that resulted in probation, but it ultimately was “amended [by the court] to a misdemeanor assault so that I was never convicted of a felony.”

That distinction is significant in terms of Tarsey’s role in the Republican Party. If Tarsey is a convicted felon and hasn’t had his rights restored, he can’t legally be a registered voter and couldn’t be a Republican Party official.

Setting up in Florida

Tarsey said he changed his name “around seven years ago” from his father’s last name to his mother’s “because I am estranged from my father.”

A Realtor.com article describes Tarsey’s mother, Patrice Tarsey, as a “real estate heiress.” Her late father — Tarsey’s grandfather — Jason Tarsey was an owner of the Dunes Hotel on the Las Vegas Strip.

He said he has a wife and two children, works in real estate and is involved with the Knights of Columbus, the Roman Catholic fraternal and community service organization. Property records show he lives in a $1.7 million home with a pool, gazebo and basketball court in the Heron Bay East community in Parkland.

In 2016, he said he had a paid job as a “field officer” for the Republican Party of Florida, which involved door knocking for the Trump campaign.

In May, after the previous Broward Republican Party secretary resigned, Tarsey was picked over two other candidates in a special party election to fill the vacancy.

As a member of the party’s six-member executive board, Tarsey became a thorn in the side of Sutton, the party chairman, according to interviews with 11 board officers, lawyers and other senior Broward Republicans, and a review of internal party emails.

On Sept. 5, as many people started turning their attention to Hurricane Irma, Sutton announced he was suspending Tarsey as party secretary. Tarsey said that action isn’t valid because state Republican Party rules don’t allow it.

Patrick S. Smith, a California lawyer representing Tarsey, filed a response, telling Snipes that his state’s court has the authority to determine whether a charge is a felony or misdemeanor, and the Superior Court ended up declaring it a misdemeanor.

Snipes said she referred the question to the Florida Division of Elections to review the question.

On Wednesday, Bob Nichols, the county party’s general counsel, emailed Tarsey that he must “cease & desist” communicating with party members “under the guise of your former position.”

On Thursday, Ben Gibson, general counsel for the state Republican Party, wrote to Nichols that the state party “has concerns with the actions” of Sutton in suspending Tarsey and his “unilateral determination that Mr. Tarsey is a convicted felon.”

In an emailed response to questions from the Sun Sentinel this week, state Republican Chairman Blaise Ingoglia said: “Rupert’s arrest is a piece of information that should have been disclosed when he originally ran for the position. Since he already holds the position, and members of the local body are now aware, their autonomous body can make a decision what to do now that this information has come to light.”

Sutton declined to discuss the controversies involving Tarsey or himself, referring questions to Nichols and Tynan, the attorneys. “I am focused on keeping Broward Republican strong,” Sutton said. “We are dealing with multiple issues.”

Gibson’s letter said someone can use the state party’s grievance procedure to attempt to remove someone from the party or two-thirds of county-level committeemen and committeewomen can vote to remove the member.

DeNapoli, a lawyer, Tarsey ally and Sutton foe, cautioned against a rush to judgment. “There is a concept I see at work here of ‘Hey, you’re guilty until you’re proven innocent,’ which is contrary to American jurisprudence.”

Ellich, who said she knew Tarsey from St. Anthony’s Catholic Church in Fort Lauderdale, said he shouldn’t be a county Republican officer. “I read the stuff like everybody else has,” she said. “It was shocking.”

The party’s executive board was left deeply divided, with three people in the pro-Sutton camp and three in the anti-Sutton group, after rank-and-file committeemen and committeewomen elected officers in December.

On Aug. 28, party members were told at their last general membership meeting that longtime state and national Republican committeewoman Sharon Day of Fort Lauderdale was resigning because she is the new U.S. ambassador to Costa Rica.

On Aug. 31, the remaining five board members met at the party’s donated office space in a building overlooking Interstate 95 in Pompano Beach.

No one else was allowed in. As volunteers began arriving to help plan an upcoming party dinner, the door was locked and they were kept in the hallway. “They kept coming to the door and knocking and trying to come in,” Ellich said.

With Day gone, Tarsey, DeNapoli and Treasurer Kevin Moot voted “no confidence” in Sutton. Ellich and Sutton voted against the motion.

Within days of the vote against Sutton, Republicans started hearing about Tarsey’s past.

“Obviously it was direct retaliation,” Tarsey said, explaining that he had been warned by a Sutton loyalist that there would be “negative articles spread about me” if he challenged the party chairman. He said he won’t be intimidated into stepping down as party secretary.

DeNapoli said Tarsey had “made pretty crystal clear his intentions in the last couple of months. He telegraphed what he was going to do to try to go against Sutton.”

Tarsey, who said he was concerned about “chaotic meetings” and poor fundraising, isn’t alone in questioning Sutton’s leadership. Joe Kaufman, a frequent past candidate for Congress who is running again in 2018, has launched an effort to have the entire membership remove Sutton, citing similar complaints in an email: internal party discord and ineffective fundraising.

As word spread about Tarsey, he and his supporters started raising questions about a long-time party committeeman, Ben Bennett, who is a Sutton supporter.

Bennett, 71, is the party’s sergeant-at-arms, a post he’s been appointed to by Sutton and several past county chairmen.

He is also a former police officer who went to prison. Involved in drug dealingin the early 1980s, he pleaded no contest to grand theft, attempted armed robbery, delivery of cocaine and possession of cocaine.

He served 3 ½ years of a 15-year prison sentence and was paroled in 1986 after he came to the aid of a correctional officer who was being beaten.

Tarsey described Bennet as “a disgraced ex-cop and convicted felon.” Tarsey said it is odd that Sutton is coming after him while keeping Bennett as his sergeant-at-arms.

“He has a felony,” he said. “I was just pointing out the hypocrisy that he’s going after a misdemeanor when I was a minor and he has a felony.”

Many of Bennett’s civil rights were restored in 1989, allowing him to hold a private detective’s license and register to vote. Bennett said he hasn’t tried to cover up what he did decades ago. “I’ve been here 71 years. I was a police officer for most of my adult life. I made a mistake. I paid the price,” he said.