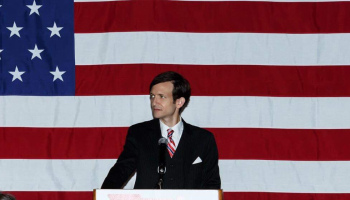 Here is the article as posted on the Shark Tank:

The leadership of the Broward Republican Executive Committee has hit a new low with its latest act of desperation, as it authorized BREC Treasurer Mark McCarthy to file a false police incident report in order to try to instigate a false wiretapping claim. On July 7, 2011, BREC Secretary Sheela Venero conducted one  of her monthly ‘Coffee with your Secretary’ events at the popular Coral Springs diner Wings Plus. Prior to the event, Venero authorized videotaping and was slated to be interviewed shortly after the event concluded.

After the videotape of the event aired, DeNapoli instructed BREC Treasurer Mark McCarthy to file a  incident report on behalf of the BREC with the Coral Springs Police Department which sought prosecution. McCarthy filed the report with the authorization of Richard DeNapoli, who also sits on the Florida Real Estate Commission(FREC), knowing full well that the breakfast event was not a ‘BREC Meeting’ as he stated in the report and was authorized to be videotaped by Sheela Venero.

Last time I checked, lying to law enforcement is a prosecutable offense, and here we have McCarthy telling a Police Officer two lies attempting to make a case.

Before McCarthy filed this false incident report, the Shark Tank has learned that BREC Chairman Richard DeNapoli wanted former BREC Chairman and current Broward County Commissioner Chip LaMarca to file the report, but LaMarca did not want to get involved with this illicit activity and refused.  Since resigning as Chairman of the BREC, LaMarca was elected to represent District 4 on the Broward County Commission.

MR. MCCARTHY WISHED TO SEEK PROSECUTION DUE TO THE FACT THAT SEVERAL OF THE MEMBERS DID NOT GIVE CONSENT TO RECORD THE MEETING.  IT SHOULD BE NOTED M A T MR. MCCARTHY WAS NOT PRESENT AT THE MEETING.

I SPOKE TO DANIEL RYAN SAUNDERS WHO IS A REPRESENTATIVE FOR MR.  LAMARCA (WHO WAS THE IDENTIFIED SPEAKER ON THE RECORDING).  MR. SAUNDERS STATED THAT HE SPOKE TO MR.  LAMARCA AND MR.  LAMARCA DID NOT WISH TO PURSUE CHARGES ON MR. MANJARREST.

I GAVE MR. LAMARCA’S REPRESENTATIVE THE CSPD CASE NUMBER. NO FURTHER INFORMATION AT THIS  TIME.

Before McCarthy filed this false incident report, BREC Chairman Richard DeNapoli called former BREC Chairman and current Broward County Commissioner Chip LaMarca and asked him to file the report. LaMarca refused to do so based on the lack of merit of the allegation, to which an irrational DeNapoli argued with LaMarca why he would not do so, telling him that ‘This is our way of getting back at him.” McCarthy went as far as to state that he wanted to “drive a stake into his heart.” It was also stated to LaMarca that the ‘Board’ had voted and agreed to file the incident report regardless of its veracity. The BREC board consists of Chairman Richard DeNapoli, RNC Co-chair Sharon Day, Treasurer Mark McCarthy, Vice Chair Colleen Stolberg, State Committeeman Ed Kennedy and Secretary Sheela Venero.

Sharon Day has gone on record stating that she was kept out of the loop regarding the board’s decision to file the police incident report,  as has Venero.  The decision by the board most likely was made by members Kennedy, Stolberg, and McCarthy, and was finally signed off on by Chairman Richard DeNapoli.

Prior to this incident, the Republican Party of Florida (RPOF) issued a statement through its Grievance Committee regarding the questionable and ‘ineffectual’ leadership within the BREC:

“Upon a subsequent telephone conference with all of the Grievance Committee members present, reconsideration of the recommendation the Committee unanimously reiterated its position state herein above, but further unanimously agreed to emphasize to you that there appear to be significant problems with the BREC Leadership and the Committee recommends you to take prompt and decisive action perhaps in the form of an investigatory task force or some Committee with authority to get you a clear snapshot of the problems and make recommendations to you and the Board for action. The feeling is that Broward is too important a Republican voting area for the RPOF to tolerate weak ineffectual divisive behavior in its leadership.”– Richard B. Davis, Chairman of the Grievance Committee

A couple of  weeks ago, the ‘task force’ that came down from the RPOF and interviewed BREC members in order to obtain a better understanding of the extent of the division within the BREC Committee. One of the interviewees was the former BREC Chairman Chip LaMarca, and in a written statement submitted yesterday, he expressed his utter disgust with what has happened to the Republican Party in Broward County:

“I am offended that the leaders of my party would go against the only Republican County Commissioner and a former Party Chairman to file this report. It equates to filing a false police report and I would expect more from our Chairman and the leaders of this party. We have so much work to do for 2012 and this is not productive in that mission.”– Current and Prominent BREC member who wishes to remain anonymous

BREC Chairman DeNapoli’s questionable leadership skills are now raising questions as to whether or not he it is appropriate for him to sit on the Florida Real Estate Commission Board (FREC). DeNapoli was appointed to the position by his ol’ friend Governor Charlie Crist several years ago, not current Governor Rick Scott, who ultimately has the last word on who is appointed or not to statewide positions.

Can the Broward GOP continue to get away with intimidating legitimate dissent from those who oppose its actions, or will its rank and file members and the Republican party stand up and denounce this behavior from its leadership and demand that those responsible resign their positions?