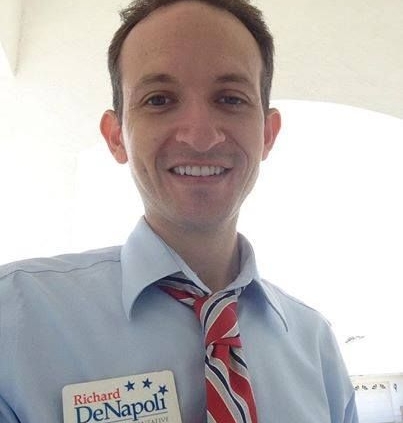 To most, Anthony Gargiulo was just another retired New York cop living in a Lauderdale Lakes condominium. But to political insiders, “Tony G.” was the man who transformed lawyers into Broward judges. In 1996, Buddy Nevins profiled Gargiulo in the Sun-Sentinel. Nevins wrote, “Anthony Gargiulo is being touted in political circles as Broward’s judicial kingmaker because of his perfect record. Since 1988, the campaign consultant has helped four lawyer-clients win seats on the bench.

Gargiulo used his contacts to help lawyers win a spot on the Broward bench. But his help did not come cheap. “His fee is steep, a minimum of $25,000 per race, but he delivers,” Nevins wrote.

In 2006, Judge Marina Garcia Wood paid the hefty $25,000 fee to Tony G. But Richard DeNapoli claims he was the “consultant/campaign manger” for Garcia Wood.

In a 2007 resume obtained by REDBROWARD, Richard DeNapoli listed campaign work for several Broward candidates. Work he failed to list on his BREC “conservative” resume. In addition to the Garcia Wood campaign, DeNapoli said he was the “consultant/co-campaign manager” for Judge Eric Marc Beller from January 2004 to August 2004. When Beller retired in 2016, Tony G Gargiulo received all the credit.

In 2016 BrowardBeat reported, “Beller won office easily in 2004 in a campaign managed by the late Anthony ‘Tony G’ Gargiulo, a political consultant so effective in judicial races he earned the nickname ‘The Judgemaker.’”

While he did not get the credit, political insiders remember DeNapoli accompanying Gargiulo on the campaign trail. One insider remembers DeNapoli helping the elderly Tony G eat lunch at one event.

With his tutelage under the highly successful Democrat Tony G Gargiulo, Richard DeNapoli’s interest in Broward judicial races should come as no surprise. Last week, REDBROWARD exposed the “Praetorian Consulting” scandal involving BREC Board members and candidates for the Broward judiciary. As the Broward Republican State Committeeman, Richard DeNapoli serves on the BREC Board.

Last Monday, Javier Manjarres, editor of the Shark Tank, reported the filing of an official grievance with the Republican Party Of Florida (RPOF). According to Manjarres, “The grievance alleges that these three individuals broke ‘for violations of the Loyalty Oaths and for conduct that is conflict with their role as a BREC member/office’ by selling Republicans lists (most likely to include the BREC membership list) to Democrats.” While Manjarres redacted the names in the grievance, it appears as though it was filed against State Committeeman Richard DeNapoli, Party Secretary Rupert Tarsey and member Michael J. Kane.

REDBROWARD was able to review a copy of an e-mail in the grievance. Sent from “michaelkane@gmail.com” to a Broward judicial candidate on July 27, 2018 the e-mail was cc’ed to Richard DeNapoli:

“We can correspond on this email address, it’s a shared address. First of all, noticed you are in [Knights Of Columbus] assembly 157. Didn’t realize that when we chatted, we are in the same council and I was the [Grand Knight] of my regular council.

Spoke with Richard, the State Committeeman who has the big list, he said 500 is good. Write up what you want us to send out and we will send it out to our 50k list multiple times. I’m sure you have already crafted a standard promo e-mail. That would work. It’s a mostly republican list but not exclusively. I don’t think you can anyways but I wouldn’t put anything partisan. Also, we will probably make an email address for you to send it out on.

Send me what to send out, confirm check has been mailed and we are good!

Separately, if you win, please give us future business!

Also if you know of another candidate in another race interested let me know.”

REDBROWARD’s attempts to reach Kane by telephone were unsuccessful. Even though Kane assisted these BREC leaders last year, it’s unclear if he authored this solicitation.

According to Broward property records, the address for “Praetorian Consulting” in the e-mail is actually the home address of Rupert Tarsey.

According to multiple records, Richard DeNapoli is employed by Coral Gables Trust located at 255 Alhambra Circle Suite 333 in Coral Gables.

REDBROWARD reached out to DeNapoli to ask if this is a coincidence. He did not respond to our request for comment.

In October, Javier Manjarres of the Shark Tank wondered why the BREC leadership decided to endorse Demmery, a Democrat public defender over Corey Cawthon, a registered Republican.

Manjarres wrote, “This is disgraceful for Republicans, but is an expected move from the embattled misfit group of Republicans who supposedly represent all Broward Republicans.”

In a statement to The Shark Tank, BREC Chairman George Moraitis, “affirmed the decision, stating that the decision was made to endorse after ‘the attorneys’ recommended it. Moraitis did not say who the attorneys were.”

Moraitis, treasurer Kevin Moot and DeNapoli are the only lawyers on the BREC Board.

In an interview with REDBROWARD during early voting, Demmery said, “I don’t pay anyone to be on endorsement cards.” When asked about the BREC endorsement, Demmery’s answers were not as clear cut. He claimed he was on the card because “people support me.”

When asked about his contact with Richard DeNapoli, Demmery denied meeting with anyone but would not answer when asked if he talked to him or any other BREC leader. “I never paid to be on any of these cards,” Demmery said.

Demmery was badly beaten by Corey Cawthon in November.

The controversy over the Demmery is not the first time an endorsement drama enveloped the BREC Board. In 2016, BREC failed to include Judge Nina DiPietro on its list of endorsements. Her husband, David DiPietro was former legal counsel for BREC.

After some prominent Republicans complained about DiPietro’s exclusion, BREC was forced to print new endorsement cards. Buddy Nevins of Browardbeat.com “was also told that the board of directors of the local GOP were split over whether to redo the cards, which will be distributed to select voters. A number of directors opposed changing the list to include Judge Di Pietro.”

What was the real story behind the DiPietro mess?

According to former BREC Chairman Robert Sutton, one particular BREC Board member did not want Judge Nina DiPietro the palm card.

“Richard DeNapoli said he did not want Nina DiPietro to get the BREC endorsement,” Sutton told REDBROWARD.

In an October 2016 e-mail to REDBROWARD, DeNapoli included the endorsement card without DiPietro. He said it was available on the party Facebook page. DeNapoli wrote, “This was the finalized guide as decided by the Board and amendments voted upon by the BREC members at the September meeting.”

Sutton said party leaders in Tallahassee were extremely angry over the slight and the cards were reprinted.

Does Richard DeNapoli hope “Praetorian Consulting” will make him the next “Judgemaker?”

Is Richard DeNapoli pushing Jeff Brown for treasurer in order to keep control of the BREC Board?

Has Richard DeNapoli always been a strong “conservative” Republican?

Did he gain good Broward Democrat contacts thanks to Tony G?